Auction clearance rates in Melbourne continue to climb – another sign that our property markets are improving.

The trend started at the beginning of the year and Corelogic reported that auction clearance rates continued to climb over June quarter.

But auction clearance rates have been in the higher since the reported period – in the high 60 percent range for much of July 2019 – albeit on low volumes.

CoreLogic reported that clearance rates across Melbourne, Australia’s largest auction market, showed an increase over the June quarter while Sydney’s clearance rate has outperformed both the previous quarter and the June 2018 quarter.

Across the non-capital city markets, clearance rates increased across all five regions tracked over the June quarter with Geelong leading the charge for regional auction markets, returning the highest clearance rate over the quarter (56.4 per cent), while the Gold Coast was the busiest of the regions with 571 homes taken to auction.

Auction results are highly correlated with housing market conditions in Sydney and Melbourne, while other capital cities generally show a much smaller proportion of properties are taken to auction.

The improved trend in auction market results provides further evidence that housing conditions are stabilising, especially in Sydney and Melbourne, where a trend towards higher clearance rates has been most pronounced.

Over the 3 months to June 2019, the clearance rate across the combined capital cities came in at 55.5 per cent across 18,104 auctions, the strongest quarterly clearance rate since the June quarter last year.

By comparison, the previous quarter saw fewer auctions and a lower clearance rate (49.9 per cent across 14,647 auctions), although the March quarter is  traditionally quieter due to the seasonal slowdown in January, so lower volumes is not that surprising.

Across the last 3 weeks of the quarter, clearance rates sat above 60.0 per cent.

It will be interesting to see if this continues.

Highest number of auctions for the quarter across capital city suburbs.

(Note: Based on total auctions held across the suburb over the reporting period)

Despite an improvement in capital city clearance rates, auction volumes are down -30% from the June 2018 quarter when 25,824 homes were taken to auction.

The combined capital city clearance rate over the June 2018 quarter was also slightly stronger with 57.8 per cent of auctions recording a successful result.

(Note: excludes suburbs with fewer than 20 auctions results reported over the quarter). 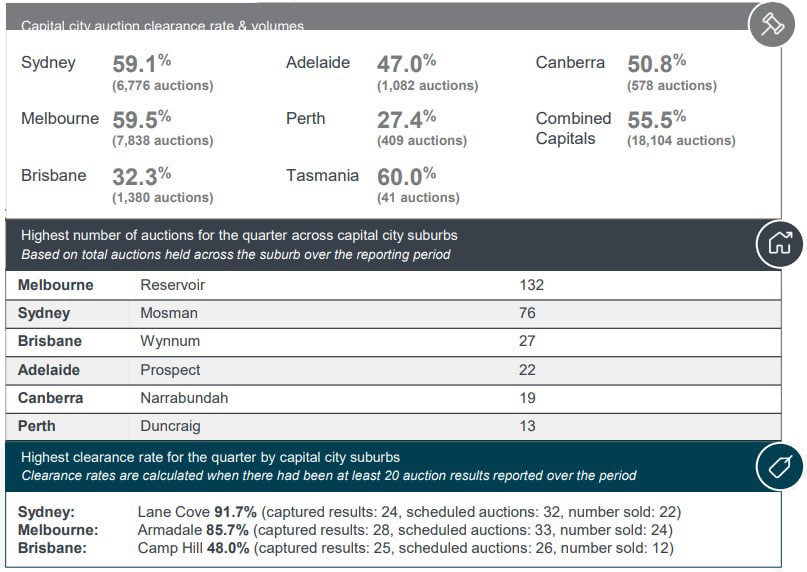 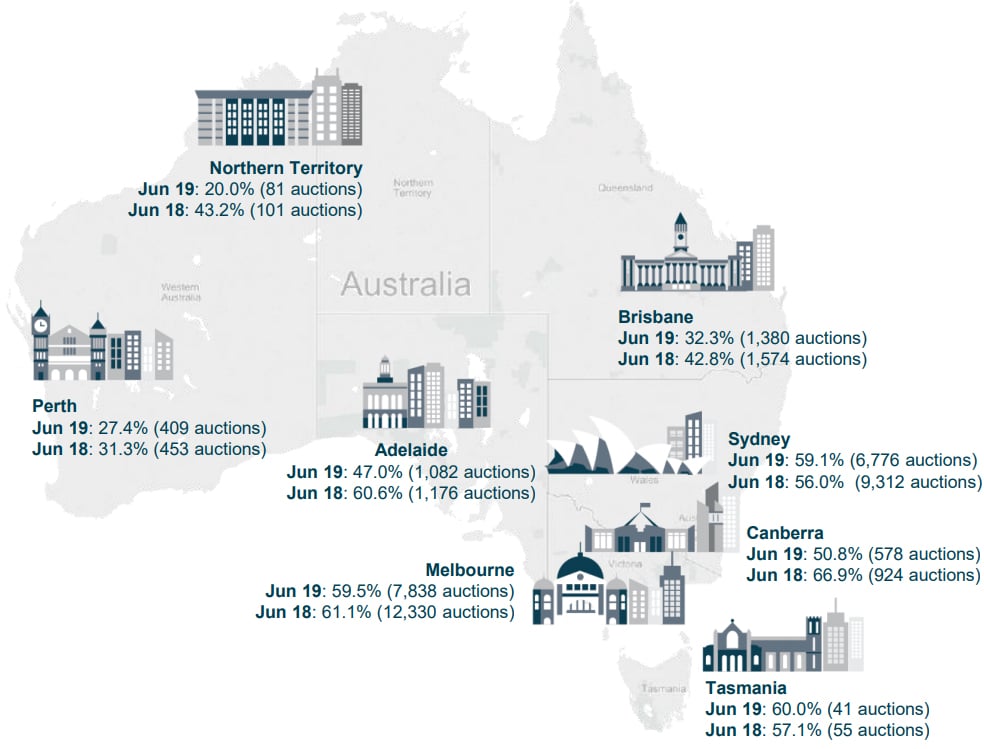