Can history teach us something about what’s ahead for property?

Is property still a good investment?

The last few flat years in our property markets and concerns about the potential for future capital growth has some investors worried.

They are wondering what’s ahead for property, especially as they’re hearing some commentators suggesting we’re in unprecedented times.

You just have to look back further.

The problem is these people don’t have a big enough rear vision mirror.  Some of us with grey hair see clear parallels with the past.

So I thought that today I’d delve into my memory and see what we can learn from previous cycles to help you understand where our markets are heading.

But before I do I’d like to remind you that even though we’re currently in the flatter stage of the property cycle, the bottom line is that as a long-term investment, property is hard to beat.

I remember reading a research report from Massey University suggesting that Australian residential property has been the best performing asset class over the long haul. The study dated back to 1920 and showed that property produced an average return of around 15% per annum (combining rental income and price gains) over all those years.[sam id=31 codes=’true’]

These figures don’t really reflect how good property is as an investment as they don’t take into account the power of leverage and the higher returns you can obtain on your own funds.

When you factor this in, property far outperforms all other asset classes over the long-term.

The market moves in cycles.
But don’t get me wrong, while there’s little doubt that property is a potent wealth-builder in the long-term, it clearly goes through cycles just as other investment classes do. This means that the reported high long-term average returns take into account periods of very high growth and also periods when property went nowhere for a few years.

A good example of that is those who bought a home or invested in the Sydney property market at its peak in 2003 would have seen the value of their properties stagnate, or even fall, over the next five years or so.

But I’m getting ahead of myself. Let’s go back in time…

Has this happened before?
Back in the early 1980’s house prices across most of the capital cities were stagnating for a couple of years.

Melbourne’s median house price languished at about $50,000 from 1980 to 1983 then grew steadily but unspectacularly before really taking off in 1987.

In Sydney, the median house price reached about $80,000 in 1981 and stayed there for the next four years.

Perth prices were falling in 1983, and Brisbane house prices were going nowhere after a year or two of 25% returns in the early 80’s. It took until 1987 before these property markets all began to boom again.

After crashing in 1990, property prices in Sydney and Melbourne stayed flat until 1995 and then slowly started moving upwards.

It wasn’t until 2000 that prices in Brisbane finally took off after a decade of growing at 5% or less per year. Interestingly this was despite a huge influx of immigrants from other states coming to the Sunshine State. And obviously they’ve been falling over the last few years again.

In Perth, a short recovery followed the boom and bust of the late 1980s and early 1990s. The market there ambled along, with annual returns at about 6% until its boom in the middle of last decade, where Perth’s median property price overtook all capital cities other than Sydney. And then of course prices have fallen over the last few years and are still 4% below their peak of 2007.

And like all the other capital cities, Sydney also experienced a period of flat property prices after they peaked in late 2003 and didn’t start rising again until 2008.

What’s been a little different over the last few years is that property prices fell at much the same time in all our capital cities, and as you can see form the chart below, they are all still below their peaks of a few years ago.

So what’s the lesson?
In short… each State has its own property cycle and there are cycles within each cycle.

Different areas, different prices points and different types of property have their own cycle.

Looking into these further, you’ll find that in each 10 year period there seems to be 3 or 4 years when the market is flat; 3 or 4 years of low capital growth and a few years of strong price growth during the boom stage of the cycle.

Clearly property investors must be aware of and prepared for these cycles.

However, as we’ve learned over the last few years, it’s hard to remain positive in the middle of the flat period of the property cycle.

You need to be patient, as over the long term values in our major capital cities have doubled every seven to 10 years.

What are the factors behind these cycles?
It’s the old story of supply and demand.

Property prices are pushed up by the demand created by a healthy economy, high levels of employment, population movements caused by migration and immigration and positive market sentiment.

They are dragged down when the economy performs poorly, when interest rates rise, when employment and immigration figures fall, when supply exceeds demand and when the market place is nervous about their wealth and their future.

Cycles are an inevitable part of any investment market and our property markets are behaving normally at present.

So what’s ahead for property?
The cycle is moving on. It always has. There is strong evidence that our property markets bottomed in May last year.

Currently the fundamentals are good for property. Our economy is performing well and interest rates are low and likely remain so for a while. Unemployment remains low, which means most Australians feel secure about their jobs.

The world’s economic problems are sorting themselves out, and the final piece to the puzzle – consumer confidence – is slowly returning.

Most household budgets are in good shape as they’ve paid down their debts over the last few years. This puts them in a good position to get involved in property this year.

Some will just renovate or improve their homes. Others will take the next step and upgrade to a new home. And more first home buyers will get a foot on the property ladder pushed by higher rents and lower interest rates.

At the same time strategic investors are looking at getting set for the next stage of the property cycle and more Baby Boomers are investing in property through their self managed superannuation funds.

However, others will hold back at this early stage of the property cycle, waiting for more signs of certainty.

Of course while they are waiting, many will miss out on significant property price growth the strategic investors who get in early and buy counter cyclically will enjoy.

What about affordability?
Every cycle I hear the cry: “Property prices are too high! They can’t keep going up like that”.

I remember it in the early 80’s and then again in the late 80’s when people said house prices just can’t go up any more. “They are so high our children will never be able to afford a house”.

But prices doubled over the next decade until they again said the same in 2003 as prices rose through the boom that started in 2001. Of course many are saying the same again now.

However, recent RBA and HIA -Commonwealth Bank stats disagree suggesting housing is the most affordable it’s been in a decade.

Recently economist Christopher Joye used the following graph in the Australian Financial Review to make the point that mortgage repayments as a share of our disposable income are the best they’ve been for a decade: 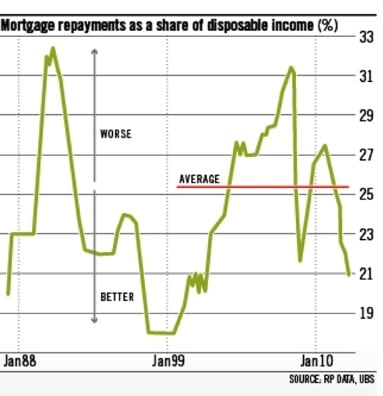 In summary…
Our property markets are behaving normally as they work their way through their individual property cycles.

Within each State the property markets are fragmented – at different price points and geographically, but overall increasing consumer confidence is bringing home buyers and investors back into the market.

Why you can’t be successful on your own

5 suburbs in Melbourne for young professionals